* This electric vehicle is a concept
Therefore all the specs for this model are estimates and may change when the production starts.
New from
N/A
Used from
N/A
Years of Production
2021 Announced
Country of Manufacture
Germany Audi

Acceleration 0-60 mph
6.1 s 77 out of 225
Range
Real-life figures may differ significantly depending on weather conditions and driving style.
250 miles 75 out of 225
Battery
kWh is a unit of energy, equivalent to the energy transferred in one hour by one kilowatt of power. The average electric car can do around 3 mi (5 km) on 1 kWh of energy.
82 kWh 53 out of 225
Details FAQs Charging calculator

The Audi Q4 e-tron concept is a compact four-door SUV whose relation to the Audi e-tron is apparent at first glance. This new model reminds us of its bigger e-tron brother, but feels even more advanced into the future. Especially the interior looks fine. According to the German manufacturer, the use of VW‘s MEB platform should improve the affordability of the electric Audi.

Two electric motors mobilize 225 kW of system power in the Q4 e-tron concept. As is typical for Audi, the driving power of the concept vehicle is brought to the road with quattro all-wheel drive. Thanks to excellent traction, it accelerates from zero to 100 km/h in just 6.3 seconds. It reaches its maximum speed at an electronically limited 180 km/h.
A large battery with a capacity of 82 kilowatt hours takes up almost the entire space in the underbody area between the axles. The range of over 450 kilometres – in line with the WLTP standard – sets the benchmark in its class. The technology of the Q4 e-tron concept controls the modular electrification platform (MEB) that will be integrated in numerous electric vehicles produced by the Volkswagen Group in the future, from the compact class to the superior medium-size class.

4.59 meters long, 1.90 meters wide, 1.61 meters tall: With its dimensions, the Audi Q4 e-tron concept takes its position in the upper third of the compact class. Its road space requirements thus qualify the electric SUV as an agile all-rounder that is suitable for city driving as well. In terms of the interior, by contrast, its wheelbase of 2.77 meters puts it at least one class higher. As there is no transmission tunnel restricting the space, the Q4 e-tron concept offers unsuspected spaciousness and comfort, especially in terms of legroom both at the front and in the rear.
The sense of spaciousness is underlined by the color scheme. While light, warm colors dominate the upper section of the cabin, the dark carpet in the floor section provides a contrast. The display of the virtual cockpit with the most important display elements for speed, charge level and navigation is located behind the steering wheel. The large-format head-up display with an augmented reality function is a new feature. It can display important graphical information, such as directional arrows for turning, directly on the course of the road.
Control panels designed as touch elements on the steering wheel spokes can be used to select frequently used functions. In the middle above the center console, there is a 12.3 inch touchscreen via which the infotainment and vehicle functions are displayed and operated. It is tilted toward the driver for greater ease of operation. A strip of buttons for controlling the air conditioning is located below it. As the center console does not need to hold functional elements such as a gear lever or hand brake actuation elements, it is designed as a spacious storage compartment that includes a cell phone charging cradle.

The Q4 e-tron concept is identifiable as an Audi at first glance by the Singleframe with the brand logo, the four rings. And it will take no more than two glances to see that this is an electric Audi e-tron: Like the first production Audi with electric drive, the new concept vehicle also features a structured closed surface within a broad, almost upright octagonal frame in place of a traditional radiator grille. Air is supplied via large inlets that extend from below the two matrix LED headlights all the way down to the front apron.
The prominently modelled fenders of all four wheels are a further classic Audi design feature that distinguishes the brand. The widened features of the Q4 e-tron concept are designed to be highly organic and flowing, and they add a characteristic touch to the side view. The accentuation of the rocker panel area between the axles, where the battery and thus the powerhouse of this SUV is located, is a typical feature of the e-tron. Large 22 inch wheels leave no doubt about the potential of the Audi e-tron concept. Its roof line slants down slightly toward the back, giving the silhouette a particularly dynamic look. 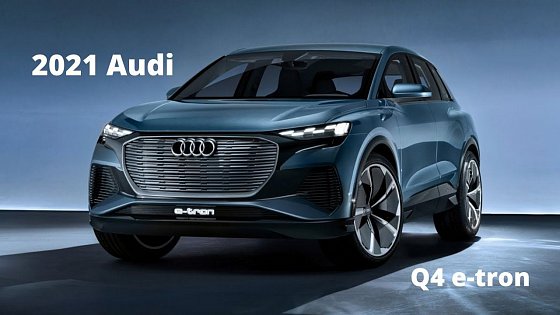 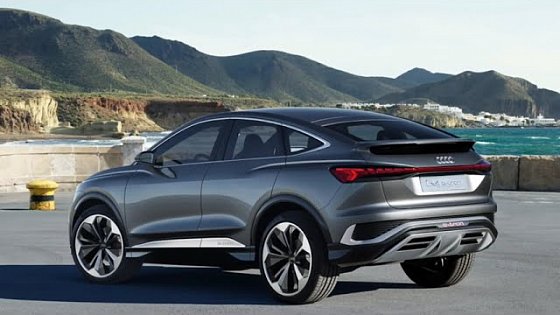 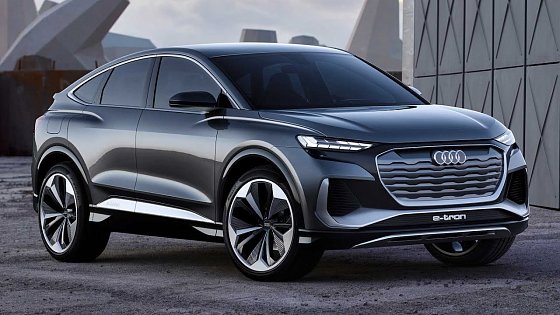 Get a Personal Deal for Audi Q4 e-tron