The first information about the Tesla pickup truck appeared about two years ago during the presentation of the Semi tractor. Since then, Elon Musk has repeatedly fueled interest in the electric car, dubbed the CYBERTRUCK. For example, it was reported that the design of the pickup truck was inspired by the sci-fi movie "Blade Runner", and outwardly the electric car would resemble a futuristic armored personnel carrier, not a pickup truck in the usual sense. What Tesla showed during the presentation is consistent with such a description.

According to Elon Musk, all modern pickups are alike. Therefore, one of the goals of the CYBRTRCK project was to create an absolutely original electric car. It is worth noting that the silhouette and body lines of the new Tesla are simple and concise, but the electric car still looks more “futuristic” than many concept cars of other automakers that will never enter the market.

The power structure of the CYBRTRCK body deserves special attention. For maximum durability and protection of passengers in the cabin, the body of the electric car is created according to the exoskeleton scheme. The body panels are made of heavy-duty cold-rolled steel - during the presentation, the body did not receive damage from hammer blows. It is alleged that steel will withstand a direct hit from a 9 mm firearm. Also, the Tesla Armor Glass, previously intended for the Tesla Semi tractor unit, will be available for CYBRTRCK.

It’s no secret that pickups are used as “workhorses”, and often on such cars they overcome serious impassability. With such a margin of safety, the Tesla pickup truck will not be afraid of any blows of fate, starting with scratches from branches on forest roads and ending with much more serious tests.

Tesla pickup truck has something to boast not only on the roads but also on a flat highway. The most powerful modification of the CYBRTRCK accelerates from standstill to 60 mph (96 km / h) in 2.9 seconds. - during the presentation, the manufacturer demonstrated the dynamics in the video of the pickup against the Porsche 911 at a distance of 402 meters, in which the electric car won.

The power of the CYBRTRCK is especially clear when you look at the traction characteristics. A pickup truck is capable of towing a cargo weighing more than 6 tons.
00:10

Why Tesla CyberTruck Worth The Wait and When It&#39;s Will Be Available, CyberTruck RC Finally Shipping. 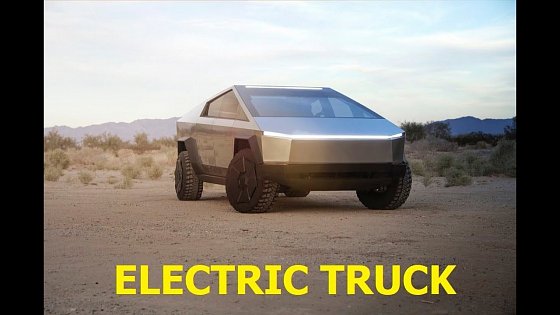